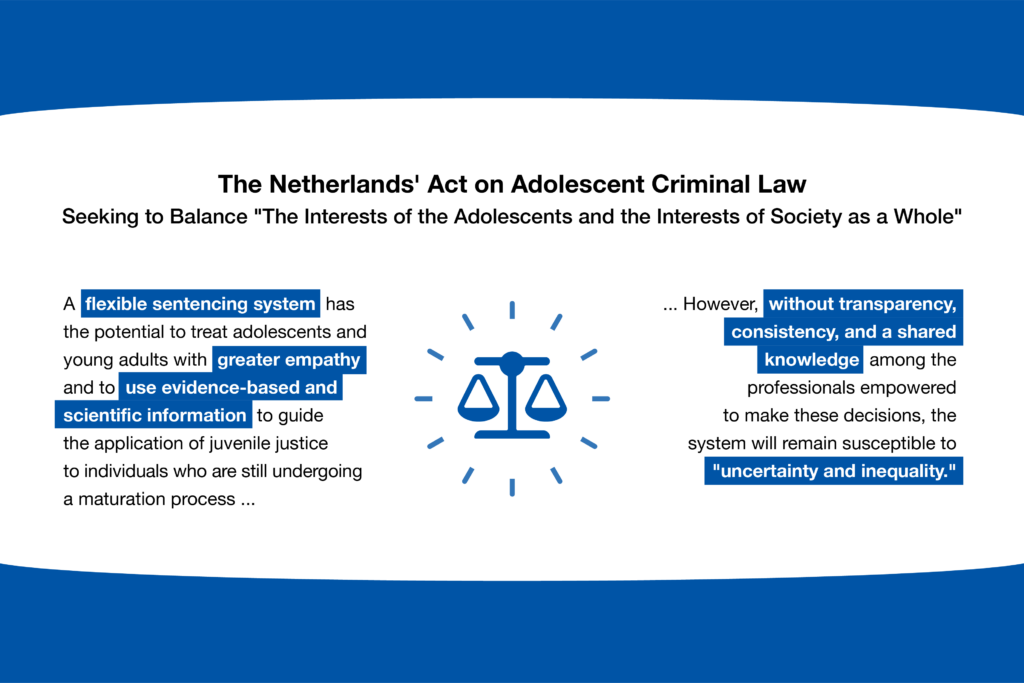 A recent article in Youth Justice highlights criminal justice reform efforts in the Netherlands designed to take a more flexible approach to sentencing adolescents and young adults. Here, we summarize the reasoning behind these changes, including the challenges specific to a youth population in the justice system; lessons learned from the new procedure used by the Dutch; and potential implications for other countries in how they approach sentencing adolescents and young adults. The full article "Young Adults in the Justice System: The Interplay between Scientific Insights, Legal Reform and Implementation in Practice in The Netherlands" by va P. Schmidt, Stephanie E. Rap, and Ton Liefaard can be accessed at the end of this blog.

In recent years, new debate has taken place among governments, academics, policy makers, advocates, and many others as to the appropriate age limits for juvenile justice. Two key factors have typically been central to the increased attention on this issue:

"As a result, the Netherlands has developed a flexible system for the sentencing of 16- to 23-year-olds by making available the sentences from both the juvenile, and the regular ‘adult’ criminal law system, for all individuals in this age cohort."

In 2014, the Dutch extended the upper age limit applied to youth in the justice system to the age of 23 under the Act on Adolescent Criminal Law, which was added as article 77c to the Dutch Criminal Code (DCC). They also retained the ability to sentence 16 and 17 year olds as adults under article 77b of the DCC. This change was made "based on the idea of providing maximum flexibility in sentencing adolescents just below and above the age of 18."

The reasoning for this application of flexibility in defining who is a juvenile under law was based on both statistics on juvenile delinquency in the Netherlands and scientific insights based on neurobiological and psychological research into adolescent development.

Statistics on Juvenile Delinquency showed a sharp decline in the juvenile delinquency rate, across all types of crimes, for both males and females with varied ethnic identities. Specifically, for youth ages 12 to 18, police noted a decrease of 65% for those considered suspects at the time of an offense.

Scientific Insights also confirmed that adolescent development into adulthood cannot be considered finished at the age of 18. Rather, it should be considered on a spectrum for each individual and can continue up until the age of 25. Key components of this maturation process are the development of logical and abstract reasoning skills, which impact both judgment and decision-making abilities.

In addition, adolescents are less able to control their impulses and are more apt to be sensation-seeking because certain parts of their brains are still developing that will eventually be able to help them "take into account the long-term consequences of decisions." Hence, they underestimate risks. Meanwhile, they are more psychosocially susceptible to peer pressure because they seek acceptance and group belonging.

All of these factors combine together to create a situation wherein adolescents and young adults are more likely to engage in delinquent behavior that entails risk-taking without thought to long-term consequences, often in an attempt to "fit in" with their peer group and obtain a short-term sensation that increases their adrenaline.

"These findings have implications for crucial criminal law concepts, such as culpability and responsibility, in the context of adolescent development. Adolescents have increasingly been singled out as a specific category in the justice system, with reduced culpability and responsibility due to their immaturity and thus – as a category – deserving more lenient punishment than their adult counterparts."

Although some countries (such as India and Brazil as noted earlier) have taken a more punitive approach to sentencing minors, others - such as the U.S. and Germany - have begun to expand the upper age limit in more cases. For example:

The Dutch have been discussing how best to treat adolescents as a separate group within the justice system since the 1950s. In 1982, a discussion around the age limit for being classified as a juvenile took place within the Anneveldt Committee, which was established specifically to review the Netherlands' juvenile justice system. At this time, "the Committee proposed to apply juvenile sanctions also to young adults up to the age of 24."

The Act on Adolescent Criminal Law was introduced in 2012 and put into law in 2014. The core idea behind this shift to the DCC was "that the offender-oriented and pedagogical juvenile justice system is more effective, in terms of reintegration into society and prevention of re-offending, for (some of the) young adults."

Key changes that were included in the enactment of the act included:

The Scientific Research and Documentation Centre of the Ministry of Justice monitored the impact of these changes to the DCC from its enactment in 2014 through the end of 2019. During this time, "the number of young adults sentenced under juvenile criminal law has remained rather low since the entry into force of the Act"—with an increase from 1-5% between 2012 and 2015.

One concern noted by the authors is a lack of uniformity in how the Act is being applied. Judicial professionals (e.g., public prosecutors and judges) have the authority to apply the provisions outlined in the Act; however, research has indicated that "knowledge of the Act on Adolescent Criminal Law is lacking among public prosecutors, especially those who work in the area of adult criminal law and who are generally not specialised in juvenile criminal law."

Although a list of criteria have been developed by the public prosecution service, they are not applied consistently, nor does everyone agree on their validity and relevance. Judges tend to defer to the public prosecutors' decision on whether or not to apply the juvenile criminal law system and interpretation of criteria can vary significantly among justices.

"Intuition seems to guide public prosecutors in stating their intention to request the application of juvenile criminal law at an early stage in the process, instead of general knowledge of the level of development of adolescents…Judges are not required to fully justify these decisions [to apply 77c] – and in fact, often do not provide well-reasoned judgements, making it difficult to distinguish the factors determining these decisions."

The flexible approach utilized in the Netherlands has enabled the criminal justice system to adapt its sentencing to adolescents and young adults who are still in the midst of transitioning from childhood to adulthood. The task has been challenging for the Dutch legislature, who are seeking to balance "the interests of the adolescents and the interests of society as a whole."

Yet, data has shown that "the target group of young adults qualifying for juvenile sentences as indicated by the legislator does not seem to be in line with the scientific knowledge that supposedly informed the legislative reforms."

The lack of consistency, clear guidance, or transparency in terms of how and when the provision to be classified as a juvenile should be enacted means eligibility is nebulous at best and based on personal motivations at worst. Screening tools and assessments differ greatly among professionals, leaving much of the decision-making around use of the provision up to the discretion of the prosecutor(s) or judge(s) involved.

In addition, the seriousness of the offense is not consistently considered with regard to the decision to apply juvenile sentencing to young adults or adult sentencing to adolescents. For this reason, one of the core recommendations for directing attention toward sentencing adolescents and young adults would be "considering a more automatic manner in applying juvenile criminal law to an accused in this age category…This would be in line with the original proposal to, in principle, apply juvenile sentences to young adults, unless the court were to judge otherwise."

A flexible sentencing system has the potential to treat adolescents and young adults with greater empathy and to use evidence-based and scientific information to guide the application of juvenile justice to individuals who are still undergoing a maturation process. It should be noted, however, that without transparency, consistency, and a shared knowledge among the professionals empowered to make these decisions, the system will remain susceptible to "uncertainty and inequality."

"The Dutch example shows that a thorough reflection on both the objectives and the theoretical foundations of a justice system for adolescents is indispensable before proceeding to the implementation of such a system."

To read the full article, visit this link.